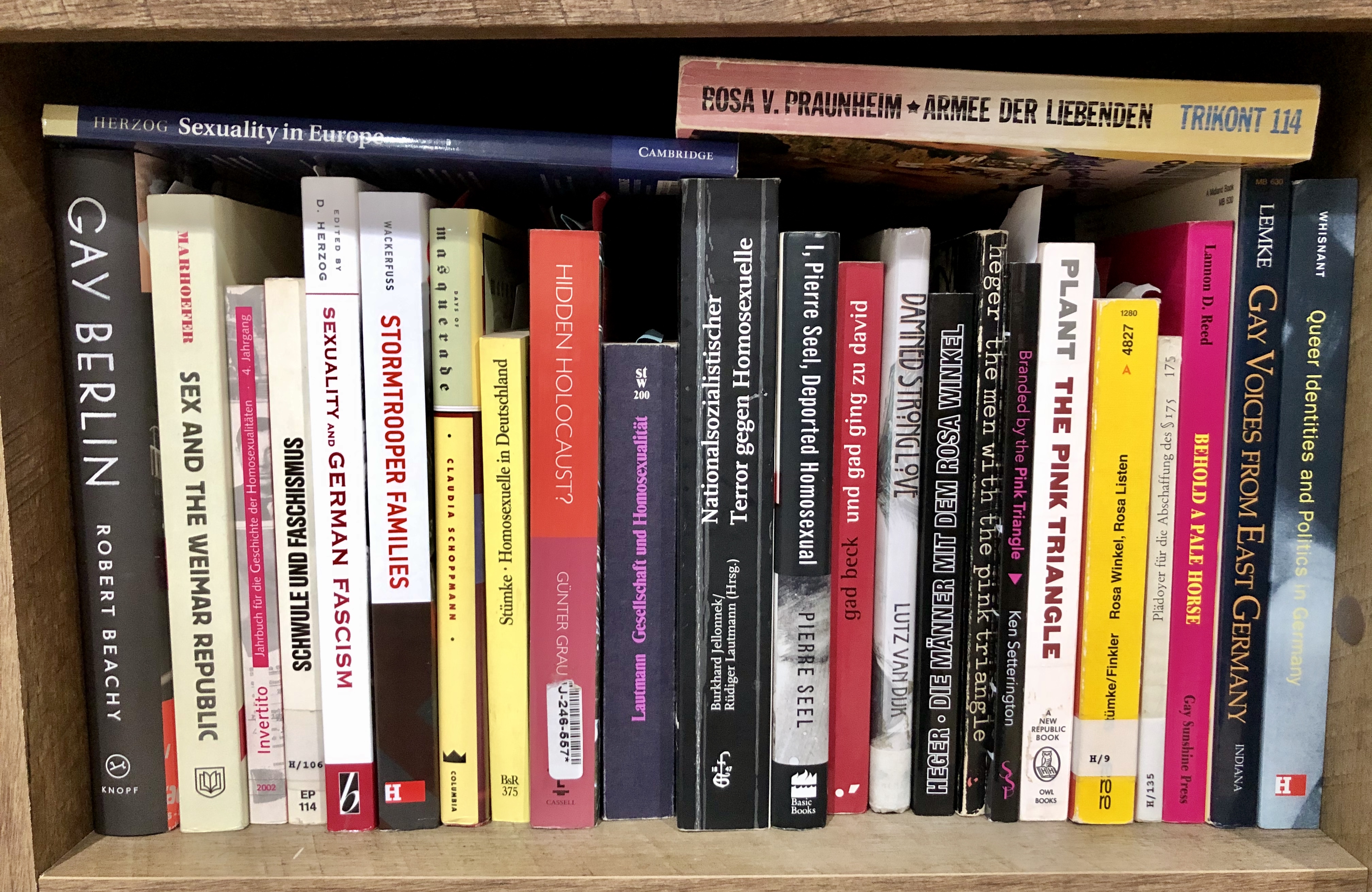 Explore the links below to find English-language digital resources on the history of LGBTQ+ communities during the Holocaust. If you have a suggestion for resources to add to this list, please contact Dr. Newsome.

You can follow Dr. Jake on Twitter, Instagram, and TikTok (profile for all is @wjnewsome) where he sheds light on the LGBTQ+ past by sharing stories and artifacts from the archives and offering insights on key books and research on queer history.

“But What Does It Mean? The Pink Triangle and Its Many Different Roles.” By Sydney Reuter (B.S. Student, George Mason University). May 2021. Runtime 17 minutes. [Download the transcript.]

Gay Berlin: Birthplace of a Modern Identity
By Dr. Robert Beachy (Professor of History, Yonsei University)
Sponsored by the Museum of Jewish Heritage and moderated by Eric Marcus (founder of the “Making Gay History” podcast)
Decadent, pre-WWII Berlin was the undisputed gay capital of the world—as imagined in “Cabaret,” and more recently in the TV shows “Babylon Berlin” and “Transparent.” Professor Robert Beachy’s “Gay Berlin” chronicles the milieu that gave rise to the international gay rights movement, with key strides made for scientific research, advocacy, and visibility—before the Nazis came to power.
(June 2019. Runtime: 1 hour 7 mins)

Transgender Identities and the Police in Nazi Germany
By Dr. Laurie Marhoefer (Professor of History, University of Washington)
Before the Nazis came to power, Germany was one of the global centers of trans activism and home to a thriving subculture of people with transgender identities. You could legally change your birth-assigned sex in some German cities even before 1900. The Nazis changed this. They brutally enforced Germany’s law against “cross-dressing.” Yet many trans people seem to have nevertheless found ways to escape the violence, especially if they were not defined as “racial enemies” of the state. This talk looks at transgender activism before 1933 and discusses what happened to trans people under the Nazi State.
(May 2019. Runtime: 52 mins)

Persecution of Homosexuals in Germany during and after the Holocaust
By Dr. Geoffrey Giles (Professor Emeritus of History, University of Florida)
(October 2016. Runtime: 1 hour 15 mins)

The Nazi Persecution of Gay People
US Holocaust Memorial Museum Facebook Live episode with guest Dr. Jake Newsome (Public Scholar)
Within weeks of the Nazis’ rise to Power in January 1933, the Nazis drove Germany’s gay culture underground and waged a violent campaign against homosexuality. Over the next 12 years, more than 100,000 men were arrested for violating Germany’s law against “unnatural indecency among men.” During this time, proof was often not required to convict an individual. Some were sent to concentration camps and subjected to hard labor, cruelty, and even medical experiments aimed at “curing” them. Join the USHMM a Pride Month Facebook Live as they give voice to a community silenced during the Holocaust.
(June 2019. Runtime 33 mins)

Pink Triangle Memories: Transatlantic Gay Rights in the Shadow of the Holocaust
By Dr. Jake Newsome (Public Scholar)
Which policies and social customs created the myth that LGBTQ individuals were “forgotten victims” of the Nazi regime? What role did Holocaust memories play in transnational gay liberation movements beginning in the 1970s? How did social activism influence historical scholarship and the movement to memorialize LGBTQ victims? In this lecture, Holocaust historian Dr. Jake Newsome discusses civil liberties, sexual identity, and the politics of memory by tracing the transformation of the pink triangle from concentration camp badge into a marker of gay liberation, community, and pride.
(January 2021. Runtime 20 mins)

Queer History & the Holocaust
This essay provides a concise historiographical overview of the key developments in the literature on queer Holocaust victims. By Dr. Anna Hájková. Notches: (Re)Marks on the History of Sexuality. (January 22, 2019)

Sexuality and the Holocaust
This essay demonstrates how studying gender and sexuality gives us tools to examine the dynamics of unequal relationships and the stabilizing and destabilizing effects of intimacy during the Holocaust. By Dr. Anna Hájková. Oxford University Press Blog (March 11, 2018)

Gay Men under the Nazi Regime
This Holocaust Encyclopedia article provides an introductory overview of the Nazis’ persecution of gay men. US Holocaust Memorial Museum

Lesbians under the Nazi Regime
This Holocaust Encyclopedia article provides an introductory overview of the Nazis’ persecution of lesbians. US Holocaust Memorial Museum

Paragraph 175 and the Nazi Campaign against Homosexuality
This Holocaust Encyclopedia article provides an introductory overview to Paragraph 175, Germany’s national anti-sodomy law that the Nazis used to prosecute gay men. US Holocaust Memorial Museum

Pink Triangle Legacies: Holocaust Memory and International Gay Rights Activism
This essay provides an overview of how the pink triangle was transformed from a concentration camp badge for gay prisoners in Nazi Germany into a logo of the gay liberation movement beginning in the 1970s. By Dr. Jake Newsome. NursingClio.org. (April 20, 2017)

Gender, Sexuality, and the Holocaust
This collection of the US Holocaust Memorial Museum’s digital teaching tool Experiencing History presents 15 artifacts and necessary historical context to help students explore: How do gender roles transform during times of war and genocide? How do understandings of sexuality and desire intersect with notions of race, gender, politics, and power? From Jewish women who took on traditionally male responsibilities, to testimonies of sexual violence, to gay and lesbian perspectives of Nazi rule, this collection explores how a focus on gender and sexuality can broaden our understanding of Jewish perspectives on the Holocaust.

Nazi Persecution of Homosexuals, 1933-1945
This teaching resources from the Vancouver Holocaust Education Centre facilitates student engagement with historical context, photograph and primary source document replication, and testimonies featured in the Nazi Persecution of Homosexuals 1933–1945 exhibition from the USHMM. The activities are recommended for grades 8 through 12.

The Pink Triangle: Gays in the Holocaust
This lesson plan from Chicago’s The Legacy Project provides context and resources to discuss the fate of gay men during the Holocaust as well as discussion prompts for how these historical lessons may be applied today.

Kitty Fischer on gay male rescuer in Auschwitz
Kitty Fischer recounts her time in Auschwitz-II Birkenau when as a young girl she encounters for the first time a gay male prisoner who will turn out to save her life. Copyright USC Shoah Foundation – The Institute for Visual History and Education.
(Runtime: 8 mins 30 secs)

Gay Survivor Stefan Kosinski
After his arrest in September 1942, Stefan Kosinski was incarcerated while awaiting his trial. In this clip, he recounts the conditions in the jail and his memory of seeing his mother out the window of his jail cell keeping vigil. She is also present during his trial before the Nazi court, which sentences Stefan to five years hard labor. Copyright USC Shoah Foundation – The Institute for Visual History and Education.
(Runtime: 7 mins 45 secs)

Albrecht Becker on Queer Life in 1934 Germany
Albrecht Becker recounts the atmosphere for gays in Nazi Germany while Röhm was still in charge of the SA and how the relative freedom he enjoyed during that time changed dramatically after Röhm’s assassination in June 1934. Copyright USC Shoah Foundation – The Institute for Visual History and Education.
(Runtime: 2 mins 45 secs)

Douglas Fox Rescued by Queer Prisoner
Thanks to the quick response of a gay prisoner at the Oranienburg-Heinkelwerke labor camp (a sub-camp of Sachsenhausen), Douglas Fox escaped from a line of transferred prisoners who were unknowingly being given a lethal injection upon their arrival. Copyright USC Shoah Foundation – The Institute for Visual History and Education.
(Runtime: 1 min 20 secs)

Frieda Belinfante
Frieda Belinfante was born in Amsterdam in 1904. Her father was Jewish but her mother was not. Trained as a musician, Frieda was one of the first female conductors. During the Nazi occupation of the Netherlands, Frieda joined a Dutch resistance group. She forged identity documents for people hiding from the Nazis and their collaborators and helped to plan an attack on Amsterdam’s population registry. The US Holocaust Memorial Museum interviewed Frieda when she was 90 years old, just nine months before she passed away. Read more about Belinfante here. (Runtime: 3 mins 45 secs) (Belinfante’s interview can be viewed in its entirety on the USHMM website.)

The Josef Kohout/Wilhelm Kroepfl Collection (US Holocaust Memorial Museum)
In 1994, the USHMM acquired the unique collection of Josef Kohout. More widely known as Heinz Heger, Kohout recorded his experiences in The Men with the Pink Triangle, the first published account of a gay survivor of the Nazi camps. USHMM staff shares his story. (Runtime: 9 mins 10 secs)

“Do You Remember When?” Gad Beck’s Album
As young, gay, Jewish men living in Nazi Berlin, companions Manfred Lewin and Gad Beck faced much uncertainty. In 1941, Manfred made Gad a small, 17-page booklet, recording moments from their daily life and titled it, “Do you remember, when.” You can also watch USHMM staff talk about the artifact in this 3 minute video.

Queer as German Folk
In 2019, the Goethe Institute released this special exhibition to commemorate the 50th anniversary of the Stonewall Riots in New York City. The accompanying digital exhibit (queerexhibition.org) presents stunning images and historical context. The site contains collections on the Pink Triangle and memorials to the Nazis’ gay victims.

Bibliography on LGBTQ+ Communities Before, During, and After the Holocaust
http://www.wjakenewsome.com

Bibliography on Lesbian and Trans Women in Germany
http://www.sexualityandholocaust.com

We Were Marked with a Big A. Directed by Elke Jeanrond and Joseph Weishaupt. Produced by: Mediengruppe Schwabing, United States Holocaust Memorial Museum, and Norddeutscher Rundfunk. 1994. DVD